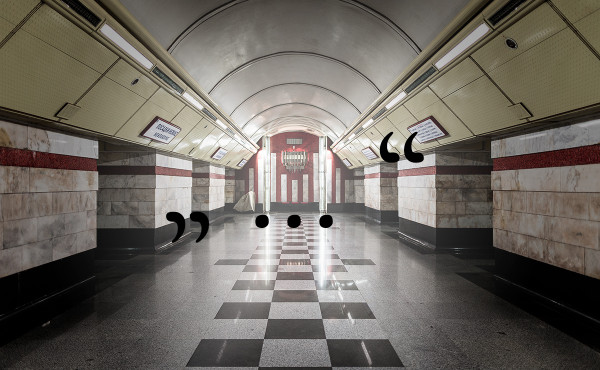 The station signs of the Kiev Metro couldn’t be more different as either they are not installed at the same height or differ in dimensions. Hence some of them even go beyond the scope of a 24 millimetre wide angle lens, what destroys a little the standardised way how this photo series displays stations signs; and the above ground built stations of red line to boot even do not have a station sign at all. At the time of shooting the Kiev Metro photo series (May 2015) two stations of the green line were not accessible at all due to construction works. Lvivska Brama and Telychka are not (yet) part of the project.

Here are the photos of all lines of the Kiev Metro

The Kiev Metro is a loved and often used means of transportation. At the big interchange stations Ploshcha Lva Tolstoho, Khreshchatyk and Soloti Vorota that becomes most apparent when an unbelievably big crowd literally flows through the stations like water through channels. Then trains are often very crowded like a Tokyo suburban train and there’s only the guy missing pushing even more people into the train cars.

There are so many people using the Kiev Metro that in rush hour the “distance” between two succeeding trains is only 60 seconds. Hats off, that’s first class performance! For this photo project that’s pretty limiting too as only the time between two trains can be used to take photos, meaning the project becomes a real piece of hard work.

The Metro works as a closed system. To be allowed to enter it you either have to buy a token for 4 Hryvna (as per May 2015) or to swipe a chip card to make the entry open its barrier. At some stations the entry is generally open though. They instantly close if someone goes through without having paid. Ladies working for the Kiev Metro control those entries.

Expansion planning includes two new lines, one leading North-South in eastern Kiev (M5, light blue) as well as a second East-West line (M4, yellow). Like red and green line the new M4 needs to cross Dnipr River as well, what has been set up already as separate rail path as part of two story Podilsko-Voskresensky bridge. However the construction works for this bridge entirely halted about 5 years ago making Kiev having a conspicuous abandoned construction. Also the green line will get three new stations in the Northwest after Syrets station and five new stops in the Southeast making a handshake with already existing red line at Livoberezhna station.